Uncharted Wiki
Register
Don't have an account?
Sign In
Advertisement
in: Characters in The Lost Legacy, Skins in A Thief's End

Edit
watch 01:13
Who is Asav?
Do you like this video?
Play Sound

Male
Asav was a ruthless warlord, and the leader of a group of Kannadigan insurgents who waged a guerrilla war against the government of India. He serves as the main antagonist of Uncharted: The Lost Legacy.

A former doctor turned insurgent leader, Asav and his ragtag band of rebels stir up trouble across his homeland of India. Obsessed with toppling the Indian government, he directs his men to loot ancient sites to fund his war effort, all while keeping one step ahead of the Indian army. Intelligent and pragmatic, his quiet demeanor belies a sadistic streak he keeps tucked away for special occasions.

Little is known about Asav's background other than that he was a doctor before he became a rebel. He is well read in Hoysala culture and the old kings of India. One of his soldiers says Asav is married, but he wears no rings (Though it's a western concept and he is a 'devoted Indian' who even dislikes foreigners) and doesn't mention a wife at all. In order to build his army, he used his charisma to convince social outcasts and weak-willed people in India to join his insurgent army to overthrow the ''tyrannical'' Indian government like any terrorist leader would do.

Asav had a brief partnership with Nadine Ross, and though it is never specified, based on his interactions with her in The Lost Legacy it was presumably a romantic one, though it ended badly.

After months of unsuccessfully fighting the Indian government, Asav began hunting for the Tusk of Ganesh so he could use it to rally people to his cause but in fact, he intended to spark civil war by trading the Tusk with Shoreline for a military-graded bomb to destroy an Indian city, which would cause mass chaos. During the chaos, he could rally up people by promising order and prosperity under his rule in which he will amass enough desperate people to build a large army strong enough to topple Indian government.

Samuel Drake was intentionally put into his rank by Chloe as expert to solve the way to get the Tusk but in fact he tried to slow Asav down by making him go on a wild goose chase. At the same time, Sam's partner, Chloe Frazer, called Nadine to help locate the Tusk.

Events of Uncharted: The Lost Legacy[]

Chloe and Nadine enter the active war zone to steal an artifact that is the secret to locating the Tusk of Ganesh inside Asav's main base. He is only heard on a walkie talkie, telling his men to meet him inside. He is then seen for the first time by Chloe through binoculars, talking to his men and she calls him "handsome".

The two break into his high-rise and observe his stolen artifacts, and even ivory trade, before breaking into his safe and stealing the Disc of Ganesh. However, Asav returns to the top floor with armed men. He is surprised to see Nadine but nonetheless warmly greets her, though he slightly mocks her for losing Shoreline and working with a thief like Chloe. After Chloe reveals she has the disc and fails to bargain their way out, Asav orders them executed. Nadine and Chloe manage to escape via the rooftops until crash landing in the river.

Asav litters the Western Ghats with his men, and Ross and Frazer notice him entering with his convoy.

While making their way to the aqueducts, Asav has his men posted outside and hunts Chloe and Nadine in an APC. Though it seems they escape his sights, Asav rams through the wall they were climbing, giving him the opportunity to steal the disc back. He explains his goals whilst referencing the old kings of Hoysala, and prepares to execute Chloe. Nadine escaping distracts him and a fight ensues. To Frazer's surprise, Asav is a fearsome opponent, and she cannot gain the upper hand until Ross sneaks up from behind, but Asav still throws them through a brick wall and into the aqueducts. They survive the ordeal and later find him and his men being led by Sam.

After Chloe and Nadine fall into the river, and Asav ambushes and captures them along with Sam. They enter a puzzle room that depicts Ganesh being struck by Parashurama and losing his Tusk. He forces Chloe to solve the puzzle with Sam and Nadine's lives on the line, and doing so reveals the Tusk of Ganesh. Asav readies the chamber to detonate and drown the three, though this gives them the opportunity to escape.

Asav has sold the Tusk to Shoreline in return for a military-grade bomb that will be detonated in the heart of an Indian city, in order to spark a civil war that will erase the bloodline of the new kings. It would also create nationwide chaos, allowing Asav to use manipulation to recruit the most desperate people to topple the Indian government. He loads the bomb in a train, but Chloe and Nadine have already re-directed it to a broken bridge. By now, Asav violently fights Frazer and Ross and states to them that when he gets rid of them he will buy another bomb to continue his cause. With some struggle, the two pin him down beneath the bomb. Knowing that he will die, he gloats to them that more people will rise up to his cause and he will be the martyr for the rebellion. The train then falls off the bridge, causing the bomb to detonate, killing Asav, and presumably ending his rebellion.

Asav is available as a multiplayer skin for the Villains side. He can be purchased for 300 Uncharted Points or unlocked via a DLC Vanity Chest.

You see, to rule a people, you must first sow chaos.

Outwardly polite and soft-spoken, Asav declares himself a passionate freedom fighter for his homeland - at least as an excuse for many of his actions. In truth Asav was a ruthless insurgent rebel obsessed with the toppling of the Indian government which he declared as weak and corrupt. Well-read in Hoysala culture, Asav loathes the bloodline of the new king which is rampant in India due to the mercy of the young king virtually ending the rituals of the old kings, the bloodline of Asav which he considers superior. Among his many facades, a man who fought for the Indian people was perhaps Asav’s most delusional due to his brutal and self-obsessed nature, he is very religious, and seems to be willing to turn the country into an absolute theocracy.

Asav’s hypocritical mindset is further evident via his actions whilst desecrating the Hoysala ruins and even the lost city of Belur - surprising even Chloe Frazer who believed Asav would hold respect for the forgotten capital due to being key in his own culture’s history and his own proclaimed respect for Indian heritage and history. Ultimately, as a war profiteer, Asav has robbed artifacts from their sacred places - including the Tusk of Ganesh - to finance his war against the Indian government. A weakness in that regard is how Asav’s enemies underestimate his complete ruthlessness in accomplishing his goals, Chloe and Nadine Ross believed Asav would use the Tusk of Ganesh to waver more sympathizers to his cause yet his decision to sell it for a bomb highlights his claims of preserving his culture’s heritage was ultimately false and he was a warlord to his core. Despite Asav's having a wife, Asav was not entirely faithful. Since he demoted, feelings for Nadine, although he was able to almost kill her when she intervened his goals.

As a strong believer in Hindu mythology, Asav did not fear death due to the idea that everything was replenished and reborn anew. This viewpoint seemed to encourage his actions as by destroying the current Indian government it would allow it to return from the ashes stronger with the blood of the old king. Asav also used this as an excuse for his victims to reflect on the past mistakes on their lives that brought them to their death so they would fare well to avoid it in their next life, something which he claims to Chloe, Nadine and Sam in a sadistic fashion before leaving them to drown. This could explain his lack of concern over his impending death whilst fighting Chloe and Nadine on his train which was headed towards a destroyed bridge - though Asav’s insanity at this point could be a factor in this regard. He often mocked to Chloe “see you in the next life” in his game over sequences.

Despite trying to project himself as polite and civilized, Asav was an arrogant opponent who reveled in violence though his difficulty in finding the perfect balance made him, as Nadine claimed “as unpredictable as they come”. Though he claimed to consider himself a patient man, Asav continuously degraded and insulted Chloe and Nadine whilst attacking them on board his train as his well-mannered facade dissipates over frustration whilst dealing with the two. Even his final words were an insult to those who had bested him, highlighting his truly sadistic nature hidden behind a polite facade that ultimately cracked.

Matching his supposed passion for his Indian brothers, Asav holds a great deal of disdain for foreigners such as Sam Drake and Chloe - the latter especially for being “half-blood” and a thief (despite being similar to his own line of work). Nevertheless, he comes to have a begrudging respect for her knowledge of Hoysala and Indian culture, locating the lost city of Belur and ultimately admits “there may be a drop of Indian blood in [her] after all”. To serve his own goals, though Asav would think nothing of destroying an entire “city of peasants” (in his perspective) if it was rampant with the supposed weak bloodline of the young king.

Asav is a master combatant, brutal and efficient in hand-to-hand combat, easily overpowering both Chloe and Nadine fighting him as a cohesive unit. Asav's restricted and controlled fighting stance comes across as barely held together, his sadistic tendencies simmering just beneath the surface. It isn't until the finale where he's backed up against a wall that Asav bears down on Chloe and Nadine with his full strength. 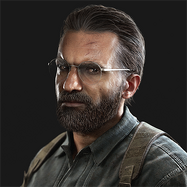 Characters in The Lost Legacy
Community content is available under CC-BY-SA unless otherwise noted.
Advertisement