Chloe Frazer
Nadine Ross
Asav's insurgents are a paramilitary insurgent group in India and the main antagonistic group in Uncharted: The Lost Legacy.

Originally working as a doctor, Asav used his immense charisma and leadership skills to gather and lead rebels against their homeland of India, convincing his followers that they are fighting to overthrow the tyranny of the Indian government. His insurgents quickly turned several Indian cities into a war zone by the late 2010s. The soldiers fighting under the Indian government were not strong enough to put an end in the war.

The group appears to fund itself mainly from ancient relics and artifacts, sold to the highest bidder. They seem to share history with the mercenary group Shoreline, who appear to be one of their buyers.

Section incomplete
This section is empty or needs to be expanded. You can help the Uncharted Wiki by writing it.
The insurgents are encountered in the beginning of the game and are shown to be quite ruthless to civilians that stand in their way. The first encounter is when Chloe Frazer and Nadine Ross sneak into Asav's headquarters in hope of finding any clues on the whereabouts of the Tusk of Ganesh. However, they are spotted by Asav's insurgents. With clear intentions of holding a grudge against the duo, Asav orders his men to shoot them before "[throwing] their bodies in the river".

In Chapter 3, two insurgents having a conversation vastly underestimate Chloe and Nadine's prowess in combat and are subsequently killed.

Light soldiers are the most common soldier types. They wear M81 camouflage and use handguns or long guns. They are easily defeated and require little strategy, but are more dangerous in groups.

A light insurgent with an INSAS.

A light insurgent with a handgun.
Add a photo to this gallery

Medium soldiers wear brown uniforms and always carry long guns. Some soldiers may also be wearing pale green helmets, which can be shot off in order to achieve headshots. They are still rather unprotected against body shots, however.

A medium insurgent without a helmet.

A medium insurgent with a helmet.

A medium insurgent with a helmet and an Arrowhead A3c.
Add a photo to this gallery

Shotgunners wear uniforms similar to medium soldiers and wear red berets and bandanas across their face, as well as bandoliers with shotgun shells. These soldiers carry shotguns as their main weapons and may be hard to avoid at close range.

A shotgunner with a Spezzotti 12 Gauge.
Add a photo to this gallery

Snipers are deadly marksmen who wear light brown hooded uniforms, ghillie pants, and a red bandana over their faces. Some soldiers also wear helmets for protection. The sniper rifles they use have laser attachments, which unfortunately for them make them quite easy to spot.

A sniper with a Mazur LDR.

A sniper with a helmet.
Add a photo to this gallery

Rocketeers wear brown caps and carry a backpack full of rockets. They use RPG-7s, which can be seriously harmful to the player if not taken out quickly, but their lack of armor makes them glass cannons.

A rocketeer with a medium soldier after firing his rocket.
Add a photo to this gallery

Armored soldiers are the second toughest insurgent type. These soldiers have thick armored suits, which protect them from many bullets. They may use automatic rifles, P90s, shotguns, or even grenade launchers.

Some soldiers will fire rapid bursts of gunfire with their P90s and hide behind cover. The shotgun soldiers are more deadly, as they walk towards you without stopping and may get a few good shots in before dying.

An armored soldier with a P90.

An armoured soldier without a helmet.

An armored grenadier.
Add a photo to this gallery

Brutes are the most dangerous units to face. They wear heavy armour and carry large DShKs, which can shred through the player's health with ease. Body shots do almost no damage, so a recommended strategy is to shoot off their helmets to maximize damage.

A brute without his helmet.
Add a photo to this gallery

Hunters are a unique type of enemy that only appear on Hard difficulty or higher. They prefer to charge the player and grab them in a chokehold, and their appearance is marked by heavy breathing (thanks to their gas masks). When the player is grabbed, a quick-time event allows them to escape a Hunter's grasp; failing to do so in time will result in Chloe's death. Due to their running speed, making them a priority is highly recommended.

Section incomplete
This section is empty or needs to be expanded. You can help the Uncharted Wiki by writing it.

The insurgents are equipped with a great variety of weapons. Most are obtained through illegal weapons trading. 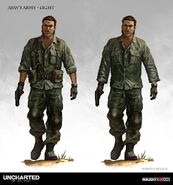 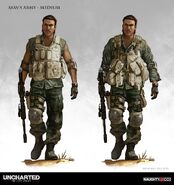 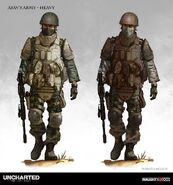 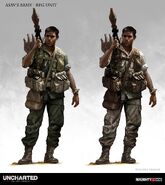 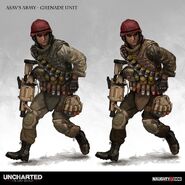 Sniper concept art
Add a photo to this gallery
Edit

Sniper
Add a photo to this gallery

v · d · e
Characters in The Lost Legacy
Retrieved from "https://uncharted.fandom.com/wiki/Asav%27s_insurgents?oldid=113500"
Community content is available under CC-BY-SA unless otherwise noted.