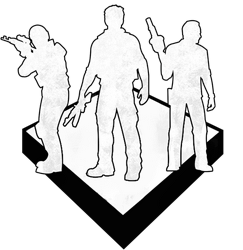 Co-op Adventure is a multiplayer co-op mode that appears in Uncharted 3: Drake's Deception.

The adventure mode is extremely similar to Co-op Objective from Uncharted 2: Among Thieves - two to three players must complete objectives while battling enemy AI. Unlike Uncharted 2, which featured individual levels unrelated to each other, Uncharted 3's Co-op Adventure mode contains a loosely-connected, linear narrative side story that takes players to environments from Uncharted: Drake's Fortune, Uncharted 2, and Uncharted 3 as Drake and the gang hunt down yet another elusive treasure.

Lazarević and Eddy (and Flynn, if there is a third player) travel to the Fortress to retrieve the statue of Janus's head and in search of Drake, who Eddy is itching to kill. The three fight through the fort until they reach a wall that they must blow open with an RPG. They then enter a room with 2 unarmed grunts in terror, saying the island is cursed. The 3 press for info, but they get nothing and Lazarevic orders to execute them. After a gunfight, Eddy shouts on an intercom that all the pirates are terrible, and the pirates then quickly arrive in armoured trucks equipped with turrets. They blow the trucks up and enter a courtyard. They must place 2 idols to open a door. After doing so, they enter another courtyard where they must do the same. They venture into the depths of the fort to find it infested with Djinn. After defeating all the Djinn, they find the head of Janus. Eddy still wants to kill Drake, but Lazarevic smugly says Drake will come to them now.

Nate and Sully (and Chloe, if there is a third player) arrive at Lazarevic's camp in Borneo. Lt. Draza appears above them, ordering a light armored soldier to get a container ready for Lazarevic. The three of them did not bring guns as they didn't expect anyone to be there, so after Draza disappears they steal guns from patrolling soldiers. After clearing the area, one of three breaks open a containers. Inside, they find one fourth of a carved stone tablet. After fighting through the camp and acquiring the other three pieces, Lt Draza appears with a dragon sniper rifle. After taking down Draza and his guards, the trio piece together the four pieces. Sully notes that there is a priceless statue similar to the tablet in the Vatican. Drake isn't sure exactly, but tells the others they're heading to London to find out.

Nate and Cutter (and Sully, if there is a third player) arrive deep within Katherine Marlowe's base. Cutter mentions a surprise to speed things up, but Nate states firmly that he wants to get in and get out without any confrontation. A few seconds later, however, agents smoke bomb in. After clearing the room, Cutter plants C4 charges on a weak wall blocking their path. The trio race to cover, but the C4 fails to detonate, much to Cutter's disappointment. Instead, an RPG-7 is used to blow the wall away. While they are squeezing through the gap beyond the destroyed wall, however, the beeping of Cutter's C4 is heard. They just get through before the ceiling collapses behind them. When they reach the secret library, Nate rips a page out of Marlowe's book, explaining it would lead them to the monastery. Smoke bombs are thrown in, and Marlowe's agents drop down. After defeating the agents, the trio begin to make their way up to the surface. They push a small carriage up the train tracks in order to access North Atwood Station. After charging outside, they are greeted by a swarm of agents, including a tank and M32-Hammer wielding enemy. After the tank is destroyed, Chloe pulls up in her van. The three men get in, and the van speeds away.

Elena, Sully and Chloe awake to find themselves tied to wooden posts deep within the monastery on the island from Uncharted: Drake's Fortune. Elena soon realises Nate is missing, and a pirate states he is dead. After breaking free, the trio fight their way into the church, where they discover Nate trapped beneath a small trapdoor. After rescuing him, they leave the church. Outside, Nate is hit in the leg by a sniper, but tells the others they need to get to the statue in the center of the courtyard. Once he is carried to the statue, he explains that he must examine the statue to get the clues he needs. RPG wielding pirates soon appear, however, and attempt to destroy the statue. Upon defeating the pirates, Nate signals Cutter's chopper. Cutter arrives shortly after, and Nate is bundled into the helicopter.

Nate, Cutter and Sully arrive at the Yemen airfield. They soon spot Harry Flynn, Eddy Raja and Lazarevic by a cargo plane. Nate finds this weird, calling it 'some kind of twisted reunion.' They have the other half of the statue, however, and Nate, Cutter and Sully fight their way through the airport until they reach them. Lazaervic wields a shotgun, Eddy uses a tau sniper and Flynn, a dragon sniper rifle. After the three of them are defeated, Nate and Sully piece the two halves together. Nate decides to name the heads 'Fleddy' for Flynn and Eddy.

Medals for Co-op Adventure only[]