Cole MacGrath, dubbed Good Cole and Bad Cole, is a selectable skin in the multiplayer mode of Uncharted 2: Among Thieves.

Cole is a main character in the InFamous video game series published by Sony Computer Entertainment; he appears as the main protagonist of 2009's InFamous and 2011's InFamous 2. The series was created by Sucker Punch Games, a fellow first-party developer of Naughty Dog, who was said to have helped in the development of InFamous.

A key feature in the InFamous series is its Karma System, which, depends on Cole's choices, can turn him into either a hero, or a villain. Due to this, two versions of Cole appear in Uncharted 2's multiplayer; "Good Cole" and "Bad Cole."

Both skins can be obtained upon the purchasing of the PlayStation Heroes Skin Pack, alongside Zeke Dunbar, another character from InFamous. 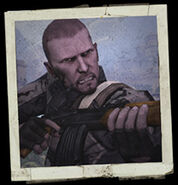 "Good Cole," as he appears in Uncharted 2's multiplayer mode.

"Bad Cole," as he appears in Uncharted 2's multiplayer mode.

Characters in Among Thieves
Community content is available under CC-BY-SA unless otherwise noted.
Advertisement