Uncharted Wiki
Register
Don't have an account?
Sign In
Advertisement
in: Characters in Eye of Indra, Skins in Among Thieves

Fred Tatasciore (English)
Daniel Pinkerton is an American-born crime lord and antique collector basing himself in Indonesia. He uses a Desert - 5.

He appears as a major character and the main antagonist of the 4-part Uncharted: Eye of Indra motion comics. While he never appeared during any of the series' single-player modes, Pinkerton appears as a playable multiplayer skin in Uncharted 2: Among Thieves.

By the mid 2000s Pinkerton based himself in a large mansion somewhere in Indonesia. Using his immense wealth, Pinkerton surrounded himself with expansive security measures, armed guards, vehicles and weapons.

In his later he appeared to become an antique collector of rare and elusive artifacts. Hunting down the three great treasures of Indra became an obsession to him in his final years; over time he managed to acquire two of the three treasures, the "Wrath of Indra" and the "Path of Indra". However, the most elusive of the three, the fabled "Eye of Indra", was nowhere to find.

By 2007, Pinkerton hired a finder to help searching for the Eye, but the two had a fallout over the job, leading to finder "no longer being in [Pinkerton]'s employment"; his words and ton heavily suggested of the finder's demise.

Events of Uncharted: Eye of Indra[]

Shortly after disposing of his previous finder, Pinkerton decided to enlist the help of the American treasure hunter Nathan Drake; in return, Pinkerton will help funding an expedition to retrieve Francis Drake's coffin. At Pinkerton's office, the two discussed about the Indra treasures.

Pinkerton handed all of his previous finder's work on the treasures to Drake, but calmly threatened the treasure hunter to not cross him. Drake agreed to Pinkerton's terms and proceeded to search for the Eye.

Raid on the Pinkerton mansion[]

While researching about the Eye, Nate and his new associate Rika Raja discovered that the Eye was hidden inside the Path of Indra. Rather than telling Pinkerton of his findings, Drake decided to rob him instead, enlisting the help of Rika and he brother, Eddy Raja.

During nighttime, Pinkerton and the majority of his guards were distracted by an explosion in Pinkerton's garage. Pinkerton and his men eventually caught up to Drake, and captured him and Eddy inside Pinekrton's office.

Furious at Drake's betrayal, Pinkerton tied the treasure hunter and his friend to chairs and proceeded to torture the two in hopes of finding out the Eye's location, including electrifying Drake and Raja. When both men refused to talk, Pinkerton brought a captured Rika to his office.

With Rika in danger, Drake finally conceded and revealed that the Eye was located inside the Path statue, much to Pinkerton's disbelief. While Pinkerton was distracted by the Eye, Rika fought off the guard who held her and was kicked towards Pinkerton's desk.

A satisfied Pinkerton stopped his men from shooting Rika and he decided to kill her with his dagger to punish Drake for his betrayal. To Pinkerton's surprise, Rika pulled from under his desk a golden gun, mortally wounded the crime lord and killed his men.

In his final moments, Pinkerton learned that Drake planned his and Eddy's capture to eventually lead Pinkerton into opening the safe containing the Indra treasures. A dying Pinkerton threatened Drake that he will hunt him down for his actions, to which the treasure hunter playfully replied that he could. However, Pinkerton was suddenly executed by Rika, much to Drake and Eddy's surprise.

Despite talking in a calm and gentle voice, Pinkerton was an extremely ruthless individual who never hesitated using or threatening with violence. While meeting with Drake to discuss the terms of his job, Pinkerton quickly yet calmly threatened the treasure hunter to not cross him. Shortly beforehand he even made an off-hand comment about disposing of his previous finder.

He was shown to possess a sadistic streak, gleefully torturing Nate and Eddy through beating and electrification beyond mere interrogation about the Eye of Indra's location. He also found it amusing when Nate attempted to negotiate with him to let the two men leave Pinkerton's manor alive, further showing his impatience and intolerance to traitors.

A vengeful man, once Pinkerton captured Rika Raja he did not hesitate threatening to kill her due to Nate's actions, and after finding the Eye, he was adamant in killing Rika to spite Nate, and would have done so if he wasn't shot by her beforehand. In his final moments, he vowed to hunt down Drake for his betrayal. 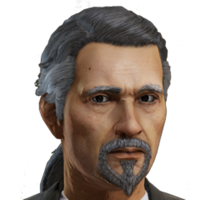 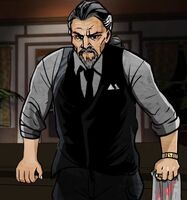 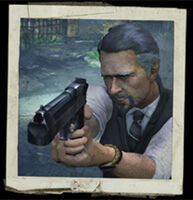