Descendants
Nathan Drake
Elena Fisher
Pirates were an antagonistic organization featured in Drake's Fortune and Eye of Indra. Led by Eddy Raja, they are a band of ruthless Indonesian and other Southeast Asian pirates that were hired by Gabriel Roman to capture Nathan Drake and secure the island, but they were ultimately slaughtered by Nate and the descendants.

Section incomplete
This section is empty or needs to be expanded. You can help the Uncharted Wiki by writing it.

They made a short appearance in Episode 2 of Eye of Indra, in which they stormed Nate's room, along with Eddy. After a short fight, the situation was defused by Eddy's sister, Rika Raja.

The pirates were first encountered by Nathan Drake and Elena Fisher in "Ambushed", in which they used speedboats to attack their barge off of the coast of Panama, ultimately resorting to the use of a rocket launcher to destroy it completely. The pirates were eventually scared off by Victor Sullivan's arrival in his Hog Wild seaplane. Nate later encountered them again after landing on the island in "Plane-wrecked". He fought through numerous pirate groups scattered about the jungle, while first searching for Francis Drake's map and Elena, who was at the Spanish fortress, where he ended up captured at the end of "Unlocking the Past".

Locked up, Nate was approached by his old colleague, Eddy Raja, whom explained his men were being killed by something other than Drake, and then offered him a deal if he would help with finding the treasure. However, Nate refused and was subsequently rescued by Elena, prompting a car chase through the jungle in "Out of the Frying Pan". Eddy Raja and the pirates managed to catch them at a dead end, until they managed to escape into the Drowned City. Here, Nate again fought numerous pirate groups, as well as a large ambush in the customs house during "Trapped". During the chapter "Heading Upriver", they fought several pirates while they were busy dumping explosive canisters into the water.

In the next chapter, "Sanctuary?", they discovered a dead pirate impaled on a spike trap, and deduced that it was not the pirates who had been setting the traps, but it was the work of an unknown third party. Nate did not encounter any pirates since, with their role primarily being fulfilled by Navarro's mercenaries in and around the monastery area.

Eventually during "Going Underground", he overheard a conversation between Eddy Raja, Navarro, and Roman inside of a mausoleum. Roman expressed his anger with Eddy and his crew's failure to capture Drake, leading him to fire him and his crew afterwards. Eddy angrily left, as he was promised a share of the treasure if he succeeded, shouting expletives in his native tongue as he went.

It was not until "The Treasure Vault" that Eddy and his pirate crew appeared again, in which they managed to force an additional entry to the treasure vault by blasting open a locked gate. He ordered his men to kill Nate and Elena, but they failed and ended up being slaughtered by the descendants. In the following chapter, "The Heart of the Vault", Nate caught an unaware Eddy, along with the last remaining pirate of his crew; Prakoso, who was promptly taken and dragged into a pit by a descendant. The two then fought against the descendants, until Eddy too faced the same fate.

At the end, Sully revealed he managed to recover some of the treasure from several pirates "who were too dead to care".

Eddy Raja's Indonesian descent is a likely indication of the other pirates' home country, as well as the use of several swear words of Indonesian origin. The few times Eddy or Nate spoke to them personally, they both also used Indonesian, though they are otherwise seen frequently using English during combat. They operated from as far as the straits of Malacca to the coast of Peru, but would be taken by Eddy anywhere if the pay was good enough.[1]

The pirates were primarily holed up at the Spanish fortress, where they had established a strong presence, using jeeps to traverse the old Spanish roads when possible, if not simply going on foot, which they did in large teams. During "Out of the Frying Pan", they were seen using a large fleet of old and rusted jeeps, trucks, quad bikes, and trikes. Their arsenal of boats and weaponry was either bought or stolen from dictators, gun-runners, and world-aid organizations.[1]

They also had established a presence at the Drowned City and its customs house, where they used jet skis to get around the flooded areas. Nate and Elena frequently had to destroy floating barrels filled with explosives that were dumped in and around the city, as well as in the river leading to the monastery.

The average pirates wear no body armor and are primarily armed with PM - 9mm pistols, AK-47 rifles, and Micro - 9mm sub-machine guns, as well as Mk-NDI grenades. The brute type comes in two variations, one wearing a bullet-proof vest, and another who is simply obese. Both types are stronger than normal, but they only carry Wes - 44 magnum pistols or Moss - 12 shotguns, with the former being relatively rare. A handful using the M79 grenade launcher are also encountered, wearing a bright red t-shirt, making them more easily identifiable. During their assault inside the treasure vault, they had replaced their AK-47s and Moss - 12s with the M4 rifle and SAS - 12 shotgun, respectively.

A few times, they are seen using turret emplacements, once on a gunboat, thrice as a defensive emplacement in the fortress, and once as part of an ambush in the customs house. A pirate was also seen using a rocket-propelled grenade launcher while attacking Nate and Elena's barge but never on the island.

Prakoso appears as a selectable villain skin in Drake's Fortune's rewards menu, simply titled 'pirate' but was subsequently available as 'Prakoso' in Among Thieves' multiplayer as a skin, as well as a skin in the multiplayer of Drake's Deception. Notably, Naughty Dog employees possessed a unique Prakoso skin wearing the Naughty Dog logo on a white shirt.

A pirate named Mac, using the vest-wearing brute model, was also available in Among Thieves after purchasing the Sidekick Skin Pack. 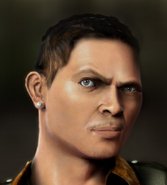 Concept art of the pirates.