Atoq Navarro's mercenaries
Better image needed
An image on this page has quality issues that need to be rectified. Please help the Uncharted Wiki by editing or replacing it with a better version.

They serve as the main group of antagonists throughout the first half of Drake's Fortune, led by Eddy Raja. Aside from their appearance in the games, they are also briefly seen in the Uncharted: Eye of Indra prequel motion comics.

The pirates appear in Uncharted: Eye of Indra episode 2. They storm Nathan Drake's room along with Eddy. A short fight then occurs between Nate and the pirates before Rika Raja, Eddy's sister, explains the situation.

The pirates are the most common enemies in Chapters 1-12 of Drake's Fortune in which, under orders from Eddy, they hunt down Nate relentlessly and attempt to kill him.

The pirate's are armed with a variety of weaponry, including PM-9mm pistols, AK-47 and M4 assault rifles, M79 grenade launchers, Micro-9mm sub-machine guns, Wes-44 magnum pistols, RPG-7 rocket launchers and Moss-12 and SAS-12 shotguns. They are also equipped with Mk-NDI grenades, which they occasionally use to flush Nate out of cover. Somewhat rarely, they will also use heavy mounted turrets to try and keep Nate suppressed in cover, while some other pirates attempt to flank him.

The pirates are found guarding various areas on the island, such as the ancient fortress and the flooded city. Eddy and his pirates are later revealed to be working for Gabriel Roman and Atoq Navarro's mercenaries, in order to recover the El Dorado treasure and receive a share of the profits.

They have also set up deadly spike traps within the jungles of the Kreigsmarine Island. If tripped on, will trigger the trap.

Many of the pirates are killed in the treasure vault by the mutated Spaniards, including Eddy. The remains of the pirates' operation is discovered in the end by Victor Sullivan, who robs them of their treasure to compensate for the loss of El Dorado.

The many different pirates come mostly from one country, Indonesia, the birthplace of Eddy Raja. A few may also be from other non-English speaking countries like that from Southeast Asia, Africa and South America. Most, if not all, are likely from the slums of their homelands, given their rugged, tough and apparently rude attitude.

While Nate is the primary foe of the pirates, they were found by Eddy to be continuously dwindling in numbers, despite the only known killer being Nate. Eddy began to believe that the island was cursed, which was later proven somewhat correct by the appearance of the Descendants. The Descendants had also built a large number of traps all around the island. The pirates, unaware that the island had been booby-trapped, would obliviously walk into these fatal traps.

Nate is confused by this at first, wondering why the pirates would be setting up traps (he believes the pirates have set up the traps) when their own men are roaming all over the area. He later discovers a trap made from the wreckage of Sully's downed plane, along with an inhuman footprint. This indicates that they were not made by the pirates, however Nate is unaware of this at the time.

Prakoso was initially available only with the special edition of the game, but later become paid DLC.

Mac can be used after purchasing the Sidekick Skin Pack. 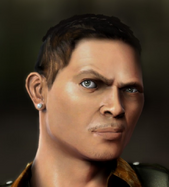 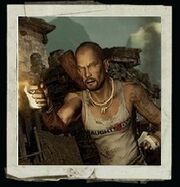 A pirate firing on Nate with a grenade launcher

Nate and a pirate in hand to hand combat

One of Eddy's last remaining pirates, just before his death.
Add a photo to this gallery
v · d · e
Characters in Drake's Fortune
Retrieved from "https://uncharted.fandom.com/wiki/Eddy_Raja%27s_pirates?oldid=112497"
Community content is available under CC-BY-SA unless otherwise noted.