Chamber of the Seven Fathers(UGA)

The GAU-19 is a weapon in Uncharted 2: Among Thieves. It is a heavy, electrically-driven Gatling gun that fires the .50 BMG cartridge. It is available in both turret and man-portable versions. It is commonly wielded by Heavy Weapons Troops.

The GAU-19 is first encountered in single player at the very end of A Train to Catch, where two Heavy Weapons Troops (referred to as "mutants" by Drake) attack Drake's position. Afterwards they are encountered infrequently; one can be picked up in Siege, while the remainder must be picked up from downed enemies in the monastery. Facing enemies wielding the GAU-19 is difficult, though the RPG-7 or M32-Hammer may be found nearby to deal with them. The Heavy Weapons Troops are also unable to climb, making them less of a threat.

It has a short wind-up time upon first pulling the trigger and its single ammo box can only be reloaded if the infinite ammo tweak is enabled. The GAU-19 does not replace any weapon when you pick it up, and will be dropped if Nate performs any acrobatic movements such as jumping or rolling, or if he is too close to an explosion. It will also drop if Nate picks up ammo for his other guns, grenades or a new weapon. It is recommended to keep the barrel spinning with taps of the trigger if you are expecting enemies. The portable version greatly slows down movement and turning speed, and disables sidearm and grenade utilization. However, both of these downsides are made up for by the GAU-19's sheer firepower, huge ammo capacity and (relatively) good accuracy, caused by its constant recoil.

There is a bronze trophy for getting 200 kills with the GAU-19 in single player.

In Uncharted 2 Multiplayer, the GAU is available on the ground floor, on the center line of two maps, on the extreme side boundary of only two maps (see the Gallery section). The weapon disappears quickly after being dropped and does not respawn.

The booster for the GAU-19 called Hell Blazer, which increases the speed at which a character walks while holding the GAU, is only useful on the two maps the weapon appears.

Scoring 200 kills with the GAU-19 will unlock the medal, worth $10,000, and bronze trophy 200 Kills: GAU-19 in Among Thieves. The same achievement also unlocks a bronze trophy in Golden Abyss. 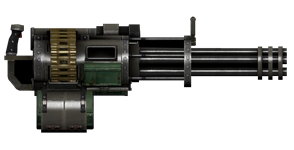 GAU-19 spawn location in The Plaza.

Heavy Weapons men with the GAU-19.
Weapons in Among Thieves
Retrieved from "https://uncharted.fandom.com/wiki/GAU-19?oldid=111434"
Community content is available under CC-BY-SA unless otherwise noted.