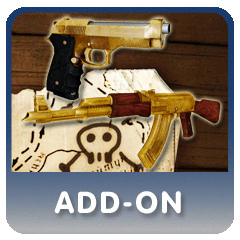 Gold weapons consist of two types of weapons that can be found in Uncharted 2's Multiplayer mode, and on the Nathan Drake Collection. They consist of the Golden AK-47 and the Golden 92FS-9mm.

The gold weapons were originally only unlocked by entering a code from the European limited collectors edition of Uncharted 2, however they were later made available in the Game of the Year Edition. There is no difference between bullet damage, they are purely for looks and bragging rights. Players who have unlocked golden guns can choose to switch them on/off on their multiplayer profile page. Players that have golden guns on will spawn with the Golden AK-47 and the Golden 92FS-9mm replacing the weapons common counterparts. Golden guns can be picked up of the floor by anyone once they have been dropped by the player.

After the Uncharted 3 announcement Naughty Dog released the Gold Weapons on the PS store at the following prices: EU- £0.79 US- $1.99. Since the 9th of May 2012, all Uncharted 2 downloadable content packs (including the Gold weapons) are free to download.[1]

The Golden AK-47 replaces the standard AK-47, however, it does not share ammo from normal AK-47's, so skilled players will often swap it as soon as possible. Many people believe that the Golden AK-47 is less accurate than the normal one, but it has not been proven.

The two weapons were added to all three remastered single-player modes. They can be unlocked either as a part of the Nathan Drake Pack (Pre-Order bonus) or by beating the game on Brutal Difficulty.

While the golden guns do not appear, any weapon can be coloured gold with the new customization system, either completely or partially. This colour is currently only available as a bonus from certain retailers, and it's unknown whether or not it will become available for public in the future. 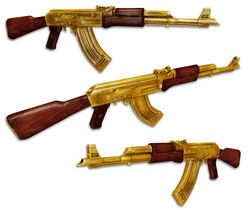 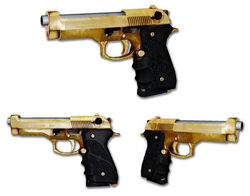 Retrieved from "https://uncharted.fandom.com/wiki/Gold_weapons?oldid=110385"
Community content is available under CC-BY-SA unless otherwise noted.