The Indian Ocean pirates are a group of enemies that appear in Uncharted 3: Drake's Deception. They are lead by Rameses.

Rameses' Pirates are a group of Middle Eastern pirates that are hired by Katherine Marlowe in an effort to eliminate Nathan Drake. They are ruthless and well-trained with a large arsenal of weapons. They have no qualms about seizing ships on the high seas, or torturing and killing prisoners.

Among their prizes is the luxury cruise ship The Seaward which serves as their headquarters. 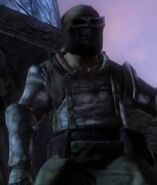 The toughest pirate of all, the Brute!

Never use a Pistole on an armored pirate.

A Carpet Bomb pirate in the beta

You kids get off my lawn!

Sword, but no shield.

Into the frying pan