René Auberjonois
Karl Schäfer is a supporting character in Uncharted 2: Among Thieves. A former Nazi expeditioner who was sent to find the entrance to Shambhala and the Cintamani Stone for the Nazis, Schäfer decided to abandon his expedition. He uses an MP40 and P08-9mm.

Throughout the later events in Among Thieves, Schäfer serves as an ally to Nathan Drake in his fight against primary antagonist Zoran Lazarević.

A German expeditioner, Schäfer was hired by the Nazis to lead an Ahnenerbe expedition into Tibet, in order to find the lost city of Shambhala. The Nazis wanted to find the fabled Cintamani Stone, something that Schäfer learned later.

His expedition eventually led him and his men into an old ice temple located within a mountain in the Himalayas. It was then when Schäfer learned of the Cintamani Stone and its powers; determined to stop ill-usage of the Stone's powers, Schäfer shot and killed his entire expedition, members of the Nazis' Ahnenerbe institute who ate the blue resin from which the Cintamani Stone was created.

Schäfer was severely wounded in the process; near death, he arrived in a Tibetan village, in which he would spend the next seventy years of his life. He also befriended the local villagers there.

In a series of events, Schäfer ends up meeting the reporter Elena Fisher, who makes it to the village. After Elena's friend Nathan Drake is brought into the village by the village's leader Tenzin, Schäfer requests to meet with him to discuss about Shambhala and the Stone, in hopes of convincing him to stop war criminal Zoran Lazarević from obtaining the Cintamani Stone's powers. He also questions Nate of the Phurba, stating it is the one piece Lazarević needs to open the entrance to the city.

With Nate refusing to continue his hunt after the Stone, Schäfer instructs Tenzin to guide Nate through the icy caves located next to village - the place where he killed his expedition members decades ago - to use as a proof for Nate in regards to the Stone's dangerous power. He then watches alongside Elena and Tenzin's daughter Pema as Nate and Tenzin leave for the ice caves.

Eventually, the two discover the rotten and frozen remains of Schäfer's men, with Nate realizing that Schäfer had killed his own men upon discovering the dangers in the Nazis possessing the Stone's power.

Upon exiting the ice caves, Nate and Tenzin find Tenzin's village to be under attack by Lazarević and his soldiers, who search for the Phurba. During the siege, Schäfer and Pema get separated from Elena, and the elder man takes care of the Tenzin's daughter for most of the siege.

While Nate and Tenzin fight off the soldier in the village, Schäfer is captured by Lazarević and is taken by him to an old monastery outside the village. Nate and Elena follow Lazarević's convoy, eventually noticing Schäfer being taken by Lazarević into the ancient building complex, after his soldiers retrieve the Phurba from Schäfer.

After fighting off Lazarević's men and making it through the monastery, Nate and Elena enter a tower, only to find a mortally wounded Schäfer, having previously been tortured and interrogated by Lazarević. In his last moments, Schäfer encourages Nate to stop Lazarević and destroy the Stone. After telling Nate to believe him, Schäfer succumbs to his wounds, perishing in front of Nate and Elena.

A memorial to Schäfer was set up in Tenzin's village, and Tenzin honored his memory with a Tibetan prayer.

Schäfer appear as a playable character in Among Thieves multiplayer. He is available at level 50 and cost $1,000,000 .

Schäfer re-appear as a playable character in Drake's Deception multiplayer. He is only available through downloading the Classic Skin Pack #2. The skin is equivalent to Schäfer's appearance in Uncharted 2: Among Thieves. 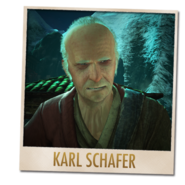 Schäfer in the character selection of the multiplayer.

Characters in Among Thieves
Characters in Drake's Deception
Community content is available under CC-BY-SA unless otherwise noted.
Advertisement