Rosalind Ayres
Katherine "Kate" Marlowe was the English leader of an over 400-year old Hermetic Order. Ruthless and manipulative, Marlowe was also the leader of a highly-trained and well-armed group of agents who acted as her order's enforcers.

Marlowe served as the main antagonist of Uncharted 3: Drake's Deception, competing with protagonists Nathan Drake and Victor Sullivan towards finding the lost city, the Atlantis of the Sands. In addition, she also appears as a playable skin in the multiplayer modes of Drake's Deception and Uncharted 4: A Thief's End.

In all of her appearances, Marlowe is voiced and mo-capped by Rosalind Ayres.

In spite of her age and grandmotherly countenance, Katherine Marlowe is not to be trifled with. The leader of a mysterious secret order whose roots date back to the time of Queen Elizabeth I, she uses her influence within the government to fund treasure hunting expeditions to fill her coffers. Given the choice, she favors psychological torture over physical, but the latter will do in a pinch.

Marlowe first appeared after Nathan Drake and Victor Sullivan defeated her men in a bar room brawl in London, and were then cornered outside. After an ugly banter between the three, she forcibly took what she thought to be Francis Drake's ring, though it turned out later to be a fake. As she went to leave, Drake and Sully attempted to follow, but were seemingly shot and killed by Charlie Cutter, who was left behind as punishment.

In a flashback to 20 years earlier, it was revealed that Marlowe commissioned Sully in Cartegena to steal the ring, along with the cipher disk it unlocked. However, a young Nathan Drake stole both before they could. He was cornered by Marlowe and her men, who took back the cipher disk; however, he escaped with the ring with the help of Sully, who thereafter takes him under his wing.

Back in the present, Drake, Sully, Chloe Frazer, and Cutter — who was actually an old friend of Sully's and acted as a double agent — followed Marlowe's trail to her underground lair, where they retrieved the cipher disk, learned that she was looking for Iram of the Pillars — a quest previously undertaken by Sir Francis and T.E. Lawrence — and used the disk to search for clues to its location. They found two separate locations: a château in France and a citadel in Syria.

In Syria, they learned that Marlowe was head of a secret Hermetic organization dating back to Sir Francis' time which specialized in intimidation. While leaving the citadel, Cutter was confronted by Marlowe and Talbot, Marlowe's right-hand man. Angered by Cutter's treachery, Marlowe set the platform he stood on ablaze, which caused him to jump and break his leg. While this scared Cutter and Chloe into leaving the quest, Drake and Sully continued onto the next stop in the quest: Yemen.

Soon after arriving, Drake was drugged and captured by Talbot. Whilst drugged, Marlowe was able to pry much information from him, including the fact that Sullivan had memorized the constellation she needed to locate the Atlantis of the Sands but not what she truly needed, the current location of Victor Sullivan. Once Drake awakened, Marlowe toyed with him, speaking of his mother's suicide, how he subsequently ended up in an orphanage, and even that fact that Drake wasn't his real name.

She pressed him for Sullivan‘s whereabouts, threatening Elena Fisher in the process and claiming Sullivan only cared for himself and no one else. Allowing Drake to think about what she said, Marlowe was informed by Talbot that they had located Sullivan. Talbot took his leave as Marlowe broke the news to Drake that he has been "removed from the equation." Temporarily escaping, Drake took off after Talbot but was soon knocked unconscious by Rameses, a pirate captain Marlowe had hired. As she now had Sullivan, she instructed Rameses to kill Drake.

Believing Drake to be dead, Marlowe set off in a convoy across the Rub' al Khali toward Iram, but soon learned that not only was Drake alive, he had also destroyed her supply plane. Leaving some of her men behind at the ghost town, Drake once again escaped, and with the aid of Salim, eliminated most of her convoy to save Sullivan. Through all of the destruction however, Marlowe made it to her destination.

Iram of the Pillars and Death

What are the roots that clutch, what branches grow out of this stony rubbish? Son of man, you cannot say, or guess, for you know only a heap of broken images, where the sun beats, and the dead tree gives no shelter, the cricket no relief, and the dry stone no sound of water. Only there is shadow under this red rock, come in under the shadow of this red rock, and I will show you something different from either your shadow at morning striding behind you or your shadow at evening rising to meet you; I will show you fear in a handful of dust.

A hallucinating Nathan hears Marlowe's voice reading T. S. Eliot's The Waste Land in his head while wandering the desert.

Once Drake and Sullivan arrived at the lost city of Iram, Sullivan was seemingly shot dead by Talbot with Marlowe at his side. However, it was later revealed that this was a hallucination caused by Drake's inadvertent consumption of the true treasure of Iram and Marlowe's goal: a powerful hallucinogenic agent hidden in the city's water supply. As Marlowe is on the verge of retrieving the urn containing the agent, Drake shot the winch lifting it. The ensuing explosions cause serious structural damage to the city, causing the city to fall apart around them.

As she made her way out with Talbot, they ran into Drake and Sullivan, but before the inevitable confrontation could occur, the floor collapsed beneath them, throwing Marlowe, Talbot, and Drake into the quicksand below. Drake and Talbot were able to get onto solid ground, but Marlowe was unable to free herself. As Talbot pleaded with Drake to save her, Marlowe persuaded Drake to earn his name by saving her, holding out Sir Francis' ring. After much hesitation, Drake threw her his bandoleer to grab onto, but she failed to get a decent grip and sunk to her death, taking the ring with her.

Katherine Marlowe returns in Uncharted 4: A Thief's End Multiplayer. She is unlocked through Vanity Chests, and is on the villains side. Her voice actor Rosalind Ayres has also returned.

Marlowe was a much more cerebral enemy than Drake had confronted in the past, using both psychological and physical tactics to get what she was after. She treated her subordinates with slight disdain, as she demeaned Talbot for hiring Charlie Cutter, a traitor.

Sophisticated and manipulative, she was a coolly calculating woman who didn't shy away from torture, physical or otherwise. She, being cruel and vindictive, would take any opportunity to belittle Drake and anyone else who got in her way, as well as take violent action.

Marlowe is played by Rosalind Ayres. In an interview, lead game designer Richard Lemarchand said, "We are extremely lucky to be working with her. "She has brought a tremendous amount to this character. At Naughty Dog, we feel that a big part of the success of the Uncharted games is due to the effort that we put into our performance capture process where we work with the actors, improvising scenes with them and very often some of the best lines come straight from the actors, the things they invent while we are rehearsing with them and Ros has been fantastic in helping us in developing Marlowe's character." 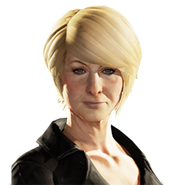 An early render of Marlowe. 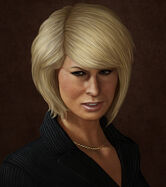 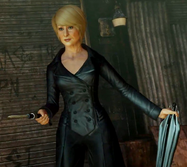 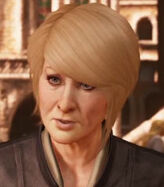 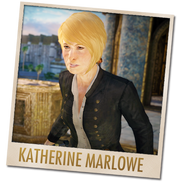 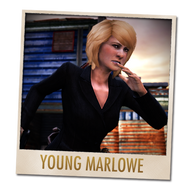 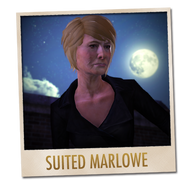 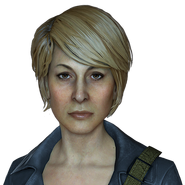 Characters in Drake's Deception
Characters in A Thief's End
Community content is available under CC-BY-SA unless otherwise noted.
Advertisement