The agents work for Katherine Marlowe and are fiercely loyal adherents of the clandestine organization she heads, employing special forces and covert ops training to confound their opponents. All of them are usually dressed in designer suits and are one of the most well-equipped opponents Nathan Drake has faced so far. They are also shown to be capable of the acrobatics Drake displays when trying to murder him in Colombia.[1] Although the skins for the agents don't vary considerably, their AI is determined by their weapons. For example, shotgunners will rush the player.

There are three variations of agents. The first and most common type are standard and elite agents, who use a variety of weapons and use cover intelligently. They will also throw grenades if Drake stays behind cover for extended periods. The second type are armored soldiers carrying shotguns or M9s - these types of enemies will slowly walk towards Nate whilst shooting at him. The third and rarest agent is the Brute. In the Co-op Adventure, there is also a fourth variant of the agents, who are dressed in white suits and wear gas masks. They carry a pistol, but will more often than not just try to strangle the player, requiring the co-op partner to shoot them.

Included in the Rogues DLC packs for Uncharted 3 multiplayer were six agent skins. It appears that agents are known only by numbers. The agents in the pack are:

Also in the game is the Dead Agent skin, referring to the dead agent Nate and Sully found in the chateau.[2]

In the Co-op Adventure, the agents only appear in Chapter 2 - London Underground.

Concept art of an agent in a desert outfit

Nate fights some agents in Yemen 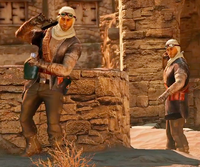