Lovac is the "Headphone soldier". His model is used for the sniper soldiers archetype in singleplayer campaign (Known as Lovacs). They carry either the Desert - 5 or the Dragon Sniper.

.Snipers specialize in high-powered weapons and will use either the Desert 5 or the Dragon Sniper. The Laser sights that pop up on the battlefield are a warning that they're aiming for a head shot. Although they're specialists in long-range kills they're also susceptible on them as well. Turn the tables on them and pick them off form afar.

Lovac "Headphone soldier" is a sniper soldier who wears a navy ski mask and headphones. His weapon of choice is the Dragon Sniper, but he can also be seen using a Desert - 5.

Lovac is also available as a multiplayer skin, and from the start, for free.

Lovac is available in Drake's Deception multiplayer, as part of the Classic Skin DLC that was released. 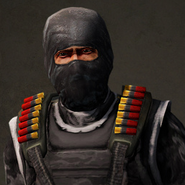 Lovac in Drake's Deception multiplayer
Characters in Among Thieves
Community content is available under CC-BY-SA unless otherwise noted.
Advertisement