"I did not tell half of what I saw, for I knew I would not be believed."

Polo gained fame for his worldwide travels, recorded in the book Il Milione (The Million or The Travels of Marco Polo), as the Oriente Poliano (the Orient of the Polos) and the Description of the World.

He learned about trading whilst his father and uncle, Niccolò and Maffeo, voyaged through Asia and met Kublai Khan. The three of them embarked on an epic journey to Asia, returning after 24 years to find Venice at war with Genoa; Polo was imprisoned, and dictated his stories to a cellmate. He was released and became a wealthy merchant, married and had three children. He died in 1324, and was buried in San Lorenzo.

Polo left China with 600 passengers and 14 ships loaded with treasure from Kublai Khan. He landed in Persia one and a half years later, with only one ship and 18 passengers. Polo recorded all of his details but never explained what happened to his passengers and ships in his journals.

During those one and a half years, Polo found the lost city of Shambhala and the fabled Cintamani Stone. Before he found the city, he came into possession of a phurba, that he later described as "a golden passport to conquer obstacles on the journey to Shambhala." He traveled to Nepal and located a temple that had shared markings with the phurba. After solving the puzzles in the temple, he came across an underground chamber that revealed the location of Shambhala in the Himalayan Mountains.

He ventured to the Himalayas and reached a monastery. After solving a number of puzzles, he used the phurba to open a secret path underneath a tree. Once there, he had to turn two blades on the wall of the underground room they reached. As soon as that was done, he lit a brazier of sorts with blue resin. Once there, he inserted the phurba into the newly shown pocket (illuminated by the blue fire given off by the resin) and the gates of Shambhala were revealed. He ventured across the caverns and opened the gates by turning cylinders along the wall. He entered Shambhala and found the Cintamani Stone. Polo thought that the Cintamani Stone was a sapphire, when it was fossilized tree sap from the Tree of Life.

Despite finding the Stone, Polo elected not to take it. He would later write in his journal, "I would've sooner endured the wrath of Kublai Khan himself than remove the Cintamani Stone from that sacred shrine". Presumably, he saw the effects that the tree sap had on humans when eaten (blackened teeth, driven to insanity, superhuman strength etc). Polo and his crew left Shambhala empty handed, but not before taking some more resin with them.

After leaving the Himalayas, Polo and his crew were hit by a tsunami and driven into the west coast of Borneo. It was there that most of his passengers and crew killed each other after being driven mad by the effects of the resin. One passenger had the phurba and a map to the Nepalese city that hosted the secret temple. The following message was written on the map: "Between Greater India and the province of Tibet lies a field of exquisitely finished temples, hundreds of gilded spires stretching as far as the eye can see."

After his ordeal in Borneo, he and his family were attacked by thieves. To ensure safety of the world, he hid some resin and a piece of parchment in a Mongolian oil lamp given to him by Kublai Kahn. The parchment had to be cast in the fire of the resin to reveal its message; "Our ships were driven by a great floodtide into the wilds of Java, as if the ocean itself sought to throw off the terrible cargo we carried from Shambhala, the curse of the Cintamani". In one of his journals, a message about the lamp was written in 13th century Latin. With this, Polo landed in Persia and continued with his life until his death. 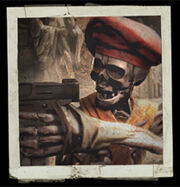 Marco Polo, as he appears as a selectable skin in multiplayer mode.

Characters in Among Thieves
Characters in Drake's Deception
Community content is available under CC-BY-SA unless otherwise noted.
Advertisement