Christine Lakin
Marisa Chase is a major character in Uncharted: Golden Abyss. Marisa Chase is the granddaughter of archaeologist Vincent Perez, who had been searching the globe for the lost city of Quivira for 20 years until he was diagnosed with cancer and mysteriously vanished without a trace after hiring Jason Dante to take charge of the expedition. Before he vanished, Perez had given Chase a golden amulet he uncovered that holds the key to unraveling the mystery surrounding Quivira. Ever since he disappeared, Chase has been trying to finish her grandfather's work by using his research in hopes of rewriting history.

She was introduced in "No Prison Tats" as she appeared at the top of cliff to spy on Jason Dante, when she interrupted Nathan Drake talking to Dante at a dig site in the jungles of Panama. She met Nate and realized he was the one Dante called for to help them with the clues presented at the dig site. As Dante wandered off into the jungle to deal with warlord Roberto Guerro, whose private militia was running amok in the jungle, Nate and Chase formed a partnership to unravel the mystery surrounding the dead bodies at the dig site. Chase, not trusting in Dante, revealed she had been secretly keeping a gold amulet (that belonged to her grandfather Vincent Perez) in her possession that holds the key to the Spanish massacre. Her grandfather had been searching for the lost city of gold called Quivira for 20 years until he was diagnosed with cancer. Perez hired Dante to take charge of the expedition and Perez soon mysteriously disappeared.

General Guerro soon arrived with Dante, furious at him for letting Nate and Chase trespass into the jungle. Guerro discovers the gold amulet Chase had and knocks Nate unconscious after trying to escape. Guerro took Chase and Dante captive to his compound to interrogate them. Chase managed to escape when it was Dante's turn to be questioned and rescued Nate from a nearby warehouse. Together the two of them went to Guerro's office to retrieve Chase's gold amulet. Inside the office, they discover that Dante had been giving Guerro all of the archaeological clues and artifacts that Perez had uncovered surrounding Quivira so he could be paid in gold by the General once they found the city. Nate and Chase retrieved the amulet and, as they were leaving the compound, Chase furiously shoved Dante into a river. Nate and Chase manage to escape by jumping into a river after being cornered by Guerro and his men.

At Perez's house, Nate and Chase discovered that a nearby underground chamber holding the Sword of Stephen will reveal the location of Quivira. They head there and find Perez's dead body, who had succumbed to his illness. Chase stayed behind to mourn his death while Nate retrieved the Sword of Stephan from a crypt. As the two of them began to leave, Dante arrived and held Chase at gunpoint. Dante insulted Guerro but he didn't realize that the General overheard him. Guerro left Dante with Nate trapped in the chamber while he took Chase captive along with the Sword and the gold amulet.

Guerro forced Chase to inscribe the symbols on the Sword of Stephan so it could reveal the location of Quivira. Once at the entrance to Quivira inside a cavern, Guerro's soldiers began to fight with Dante's hired mercenaries. Nate came to rescue Chase at the gateway to Quivira and they realized that the gold amulet is the key to opening the door. They unlocked it and used a canoe to get across a large lake inside the cave. At the center of the golden abyss, Chase and Nate found multiple dead bodies scattered throughout the cavern. A Geiger counter placed in Chase's backpack by Guerro revealed that the gold was in fact radioactive and that's what killed the people and Perez.

Dante arrived, knowing the gold was irradiated, and planned to sell the treasure in the black market anyway. Nate and Dante fought with Nate defeating him. Chase and Nate decide to leave Dante behind as they exit the cavern. Chase detonated the explosives that Guerro's men had placed around the cavern to seal the entrance to Quivira. As the cavern began to collapse, Chase's leg was caught on a fallen pillar that Guerro had shot with his rocket launcher. Nate and Guerro fought with Nate tricking Guerro onto a burning bridge that collapsed and sent Guerro falling to his death. Nate returned to Chase and lifted the pillar off of her leg. Unable to find a way out, Victor Sullivan arrived to rescue the two of them and they managed to escape the collapsing cavern in time.

At the top of a temple, Sully prepped the helicopter he stole from Dante's mercenaries while Chase threw the gold amulet into the jungle so it could be lost forever. Before Nate and Chase could kiss, Sully interrupted them, stating that the helicopter was ready. The three of them walked to the helicopter with Sully telling Chase a story about a time he met two women at a hospital.

After the trio got back to civilization her fate is unknown. She is not mentioned in any other installments or adventures, but is still presumed to be alive by the events of Uncharted 4: A Thief's End, as she is referenced in the main story via a sticky note on a box of old relics in Nathan Drake's attic which says "Send to Marisa." 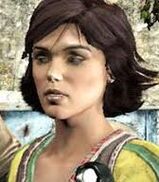 Chase and Perez
Community content is available under CC-BY-SA unless otherwise noted.
Advertisement