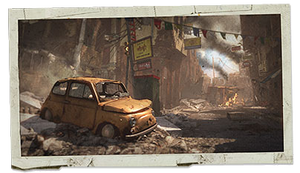 Nepal Warzone is one of the three Co-Op Objective multiplayer missions in Uncharted 2: Among Thieves.

Players will find themselves in the nearly destroyed Nepalese city seen in Urban Warfare. The mission follows the path taken in Chapter 5 almost exactly. During the mission, players play as Nate, Sullivan and Chloe as they fight their way to the Plaza to get the treasure. The mission mainly consists of shootouts between players and opposing soldiers, however some platforming is present.

This is considered to be the easiest Co-Op Objective mission of all.