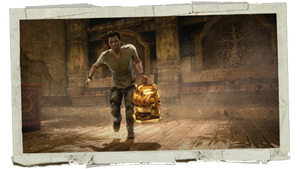 Plunder is a selectable multiplayer playlist in Uncharted 2: Among Thieves, Uncharted 3: Drake's Deception and Uncharted 4: A Thief's End.

The main goal of plunder is to bring the treasure (a large idol) back to a treasure chest in your teams base. The game mode shares similarities with "Capture the Flag" from other online franchises. The treasure can be picked up by pressing

In a standard match, the first team to capture the treasure five times or the team with the highest score when the time runs out, wins.

When Title Update 1.09 was released, all plunder related medals were increased in value and all kill-related ones were decreased. This was to get people to stop playing plunder in order to get easy kills and focus on the objective of getting the treasure to their base. The Captured medal, for example, was only worth $2,000 before 1.09, but was raised to $4,000.

Plunder appears in the following playlists:

The gamemode reappeared in Uncharted 3multiplayer.

The gamemode is pretty much the same from Uncharted 2. The only different is look of the Idol.

The gamemode reappeared in A Thief's End multiplayer.

The main difference from the previous version of this gamemode is that you only need to capture the Idol three times to win the match (It was previous first to five). Also you can throw and climb with the Idol.

Multiplayer gamemodes in Among Thieves
A Thief's End multiplayer
Community content is available under CC-BY-SA unless otherwise noted.
Advertisement