Sayed Badreya
Rameses was a Yemeni pirate, self-proclaimed businessman, and the leader of a pirate gang based in the Indian Ocean. Despite being a pirate, Rameses claims he's a "nice guy" on account that he spares Drake's life, instead of killing him as ordered.

Rameses is a supporting character and the tertiary antagonist of Uncharted 3: Drake's Deception, having been hired by main antagonist Katherine Marlowe to hunt down protagonist Nathan Drake. He is also a playable skin in the multiplayer modes of Drake's Deception and Uncharted 4: A Thief's End.

In both of his appearances, Rameses is voiced and motion-captured by Sayed Badreya.

A notorious Yemeni pirate with a flair for the theatrical, Rameses sails the Gulf of Aden with his crew aboard a converted cruise ship. While he makes a good living raiding shipping vessels, he's not above taking a land-based job if there's treasure involved.

Rameses' first appearance is in Chapter 11, after Nathan Drake is drugged by Talbot. He is seated near Nate and Katherine Marlowe at a cafe, listening to their conversation. When Talbot informs Katherine that his men have found Victor Sullivan, he gets up and intends to bring Drake to the Dry Docks for interrogation, but Nate escapes and chases down Talbot. Once Nate catches up to Talbot, Rameses knocks Nate unconscious with a large piece of wood.

Rameses transports the unconscious Nathan to the ship graveyard, taking him as a prisoner. He claims to have saved his life, as he did not kill him like Marlowe had ordered him to. Instead, he interrogates Nate for information about the location of Iram of the Pillars. Nate claims that he doesn't know where the city is, but Rameses doesn't believe him.

Rameses then tells Nate that he has Sullivan and plans to interrogate him instead, prompting Nate to break free from captivity and search for Sully around the dry docks. Rameses retreats to his cruise ship that he and his pirates have commandeered, but Nate boards it as it takes off.

You have given me so much trouble. I promise you - we're gonna end it now.

Rameses after Drake falls for his trap

After making his way through the ship, Nate discovers a masked figure in a chair who he assumes to be Sully. After removing the mask, Nate discovers that the figure is actually just clothes stuffed with vegetables.

Rameses and his henchmen then reveal themselves and attempt to tie Drake up, but Drake blows a hole in the ship with a grenade, causing water to pour in. He then shoots Rameses in the chest, wounding him. As Rameses' pirates assist him out of the room, the cruise ship capsizes.

Later on, Drake is about to escape the ship but Rameses finds him. Near death from his earlier gunshot wound, Rameses breaks the glass ceiling by shooting it with his Pistole, filling the ship with water, in a kamikaze attempt to kill Drake. However, Drake escapes the ship by jumping into the sea, while Rameses goes down with his ship.

Rameses is featured in Drake's Deception multiplayer. He is available to purchase after you reached Level 10. He cost $15,000 to purchase.

Rameses returns in Uncharted 4: A Thief's Endmultiplayer. He is available at the start and is on the Villains side. His voice actor Sayed Badreya has also returned.

Rameses considers himself a businessman and thinks he deserves respect despite his unorthodox and unethical lifestyle as a pirate. In reality, he won't even honor his employer's deals as long as there is a greater reward in it for him. He's also a liar at heart, tricking Nate into thinking Sullivan had been kidnapped as well. As he was a pirate, Rameses was no stranger to torture and even took some enjoyment out of it.

He seems to have a polite and affable side, however this quickly disappears when he doesn't get answers he's looking for. 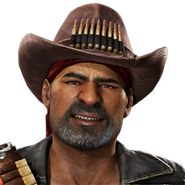