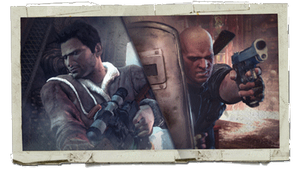 Ranked is a selectable multiplayer playlist in Uncharted 2: Among Thieves. When selected, it randomly chooses two different gametypes from a set list, and allows players to vote for which one will be played.

The current list of gametypes in Ranked is as follows:

Multiplayer gamemodes in Among Thieves
Community content is available under CC-BY-SA unless otherwise noted.
Advertisement