Uncharted Wiki
Register
Don't have an account?
Sign In
Advertisement
in: Characters in Golden Abyss, Skins in Drake's Deception

J. B. Blanc
Roberto Guerro[1] was the main antagonist of Uncharted: Golden Abyss. He is voiced and motion-captured by actor J. B. Blanc.

A decade before Golden Abyss, Roberto Guerro was the military dictator of Panama before being overthrown by a coup d'état. He escaped execution by the new regime and, accompanied by loyalists, formed a revolutionary army to hound government forces and eventually regain power. However, Guerro quickly realized that without a good source of income he would be unable to compete with the military strength of the new government, so he indulged in abductions and drug running to quickly build up the cash.

Shortly before Golden Abyss, Guerro had enough money to equip his army with guns, turrets, vehicles and explosives, but still needed more. He was approached by an archaeologist, Vincent Perez, and his partner Jason Dante, who wished to investigate ruins within Guerro's territory on a potential lead to Quivira, one of the Seven Cities of Gold. Guerro agreed, presumably planning to kill both Perez and Dante when he had the gold, which he would use to fund the revolution. After Perez's disappearance, he allowed Dante to take over the excavation only if he complied with orders.

Jason Dante asked for Nathan Drake's help at a dig site in the jungle of Panama but Guerro was not pleased with allowing Nate and Vincent Perez's granddaughter, Marisa Chase, wander around in the jungle digging up clues leading to Quivira without his consent. Guerro found Nate and Chase and took them captive to his compound. He interrogated Chase and began to have doubts about Dante. Chase escaped from Guerro's men and set the compound on fire to act as a diversion to rescue Nate from captivity. Guerro ordered his men to try and put out the fires and to find Nate and Chase, who were in possession of a gold amulet that was the key to Quivira. Guerro and his men cornered Nate and Chase at a cliff but they jumped into the river and escaped.

A week later, Guerro and Dante followed Nate and Chase to an underground chamber that held the Sword of Stephan, which had symbols on it that revealed the location of Quivira. When Dante arrived in the chamber, he insulted Guerro but didn't realize that Guerro overheard him. Guerro left Dante with Nate in the chamber while he took Chase captive with the Sword of Stephan and the gold amulet. Guerro ordered his men to set explosives around the underground chamber and detonated them to kill Nate and Dante. The two of them escaped but Guerro and his army got away with Chase.

Guerro forced Chase to inscribe the symbols on the Sword of Stephan and, once they found where Quivira was located, he and his men ventured into the jungle to the lost city of gold. Dante hired a group of mercenaries to fight against Guerro and his men so he could claim the treasure for himself. As Guerro's soldiers battled Dante's mercenaries, Nate and Victor Sullivan made their way to Quivira admist the chaos. Nate went on his own after Sully injured his leg and entered the mountain where the golden abyss was located.

Inside the cavern, Guerro's men began to set up charges on the support columns to eradicate Dante's mercenaries in case they didn't reach the treasure. After Nate and Chase realized that the gold was radioactive, Chase detonated the explosives, causing the cavern to cave in. Dante and his mercenaries died along with Guerro's soldiers. Before Nate and Chase could reach the exit, Guerro used a rocket launcher to blow up a pillar that fell on Chase's leg, pinning her down. Nate and Guerro fought each other with Nate defeating Guerro by tricking him onto a burning bridge that collapsed and caused him to fall to his death.

Roberto Guerro was released as a villain skin for the multiplayer mode of Uncharted 3: Drake's Deception on August 7, 2012 as part of Patch 1.13. He is free to unlock. 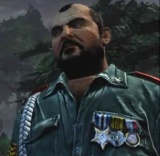 Guerro with 2 of his men

Guerro with one of his soldiers.