Salim is the leader of a Bedouin tribe that live Saudi Arabia 🇸🇦 across the Rub' al Khali desert. He appears in the final act of Drake's Deception as a major ally to protagonists Nathan Drake and Victor Sullivan while opposing Katherine Marlowe and her dangerous army of agents.

Salim was voiced by TJ Ramini, who also did the character's motion-capture work. Ramini returned to voice the character in the multiplayer mode of Uncharted 4: A Thief's End.

Little is known about Salim's early life, but it known that he was born into a Bedouin tribe whose goal was to protect the secrets of the fabled Iram of the Pillars, also known as Atlantis of the Sands; a legendary city condemned by the Israelite king Solomon and said to hold the power of "Djinn", dangerous demons.

As the protector of Iram's entrance, Salim made Rub' al Khali his home, and, despite being a wanderer by heart as common with his people, Salim rarely strayed far from the desert. At some point prior to 2011, he became the Sheikh of his tribe.

Encounter at the abandoned settlement[]

Circa 2011, Salim's scouts noticed the presence of English convoys roaming in the Rub' al Khali. Uncertain of their motives, Salim had his scouts track down the English convoy's road for at least two days.

He and his men are later alerted of shooting happening in an an abandoned ghost town, later revealed to them as a gunfight between the English guests against a lone American man. As the American is overwhelmed by the English, Salim and his tribe attack and reluctantly rescue him.

Fighting their ways out the settlement, Salim loses at least one his men while receiving help from the American. After killing the majority of the attackers and escaping the ghost town, Salim, his men and their new guest head to the tribe's camp.

At night, Salim treats the American to some rest, but interrogates his and the English' reasons to cross the Rub' al Khali, learning in the process the American's name to be Nathan Drake and the English are trying to find the entrance to Iram. Fearful of the danger, Salim explains the city's history to Drake before having the treasure hunter join them in an attack on the English convoy.

Attack on the English caravan[]

The next day, Salim and Nate ride towards the English convoy. After riding through narrow fissures, the two notice the convoy as it drives through a large canyon, before closing in and attacking it by hijacking and destroying the convoy's trucks.

Nate instructs Salim to move towards the leading vehicles, believing his friend Victor Sullivan is in one of them. The two proceed to mow down multiple motorcycles, jeeps and trucks, all while exchanging some jokes, with Salim complimenting Drake's skills.

As they race further, Nate loses his horse but Salim rescues him and pulls him onto his horse. Nate quickly returns to his own horse before continuing he attack on the convoy, now aided by a handful of Salim's men. Salim and Nate eventually get to the leading vehicles and rescue Sully, with Salim taking the elderly treasure hunter on the back of his horse.

After the destruction of the convoy, Salim is quickly introduced to Sully before urging the treasure hunters to stop the English from reaching the city. Salim and his tribe rush into an approaching sandstorm, but in the process lose Nate and Sully, who end up fighting against remnants of the convoy straight into the entrance of Iram.

Iram of the Pillars[]

Eventually, Nate and Sully enter Iram and clash with the English agents, resulting in the destruction and ultimate collapse of the lost city as well as the loss of the brass vessel that contained the Djinn. Before the two could go down with city, Salim dashes into Iram with two spare horses and urges Drake and Sully to ride with him.

Salim leads the two out the city's entrance. After making a safe distance, the trio watches as the city disappears into the desert, with Salim remarking in shock. With the threat over and Iram finally in ruins, Salim leads the treasure hunters away from the ruins.

Salim is a dutiful and serious individual, often reluctant and careful when in action. He is not afraid to dirty his hands, and is willing to violently stop anyone if it means keeping the nightmarish secrets of Iram at bay. When Katherine Marlowe's men scanned the Rub' al Khali for Iram, Salim took immediate action in halting their progress, taking down multiple hostile agents.

As the head of his tribe, Salim appears to be a charismatic leader, and while their screenshot was limited, his men seem loyal to him and prepared to dive into risky situations at his command, as seen when he led his tribe to attack both the ghost town where the English agents took over, and the convoy.

He is wary of strangers, and despite sparing Drake's life, questioned the treasure hunter about his intentions. His first meeting with Drake may suggest he is also reluctant towards anyone speaking English, as he raises his gun at Nate the moment he confirms to speak the language. This behavior might arise from Salim's duty as Iram's keeper, or as the result of scouting Marlowe's men for several days.

His suspicion notwithstanding, Salim shows kindness to people he concludes to be in distress, even if they might be an enemy. He appears to follow some rule of sacred hospitality, as he invites Drake to rest at his camp.

Despite his initial uncertainty of Drake, Salim is indicated to be very loyal and protective towards those he deems trustworthy, as he quickly lets Drake help them in attacking Marlowe's convoy and even trades jokes with him and quickly trusts Sully due to his connection to Nate. He ultimately saves the two when Iram collapses.

Being the protector of Rub' al Khali's secrets, Salim is very knowledgeable about Iram's past and fate. He seems to be somewhat superstitious in that regard, as he speak of Djinn and demons in a stern tone.

Salim's mother language is Arabic, but he is also fluent in English.

Salim is tall, lean and tanned-skin man who, during the events of Drake's Deception, appeared to be in his 30s. While the top of his head is hidden by a blue turban, Salim's eyebrows and short, stylized beard show that he has black hair. His eyes are dark brown.

In his few appearances throughout Drake's Deception, Salim appears to favor the color blue, as both his turban and the loose shirt he wears are dyed in this color. Around his shirt he wears an ammunition belt, alongside what appears to be a pouch where he keeps at least one dagger.

He completes his outfit with dark gray pants and brown high boots.

As the leader of the Bedouins and the keeper of Iram, Salim is an experienced and seasoned warrior with noticeable talent and skill in modern weaponry, with a tendency to favor sidearms. Despite being often outnumbered, Salim and his tribe manage to take down multiple hostile agents at once without suffering heavy losses themselves.

He is also a capable horse rider, who leads his men himself. He is shown to be very a very capable shooter even on horseback, and is able to dash through desert vehicles with ease.He also appears to be fairly fit and acrobatic, as he occasionally jumped from his horse towards a truck, overwhelming an enemy in a hand-to-hand combat before jumping back on his horse.

Salim is also in possession of a silver dagger hanging on his waist, but he was never seen using it.

Salim is the leader of a Bedouin tribe located in the Rub' al Khali desert. His fellow Bedouins appear to possess respect and trust in him, willing to ride alongside their sheikh into battle.

Salim first encounters Nathan Drake when the latter was cornered by the English gunmen Salim was scouting for the past two days. While uncertain of the American at first, Salim decided to spare Nate and save him from the English. The same night, Salim questioned and expressed his doubts at Nathan, but after Drake went on to explain his reasons to be in the desert, Salim decided to side with him in attacking the convoy carrying Nate's friend, Sully.

During the attack on the convoy, Salim and Nate fought closely and Salim grew to like Drake, warning him of incoming attacks and even joking and complimenting Nate, which indicated his growing respect for Nate's skills. Salim also proved loyal and understanding, helping to secure Sully at Nate's request, and even rescuing Drake himself after the latter lost his horse.

Their friendship was also shown when Salim found Nate and Sully escaping the fallen Iram and providing them with horses before hastily leaving the city.

After becoming acquainted with Nate, Salim decided to aid him in saving his mentor Victor Sullivan, despite not knowing the man personally. During the convoy raid, Salim rescued Sully and pulled him onto his horse as Nate fought off a brute. Later on, the two formally introduced to each other, and Sully, knowing the threat of Iram, agreed to aid Salim in stopping Marlowe.

After the collapse of the city, Salim arrived in time to save Sully and Nate.

Salim is a playable character in the multiplayer mode of Drake's Deception. He is unlocked once the player reaches level 60, and is placed in the Heroes side.

As part of the "Doughnut Pack", a massively overweight variant of Salim is also available as a hero skin, dubbed "Doughnut Salim".

Salim reappears as a playable skin in Uncharted 4: A Thief's End's multiplayer mode, once again on the Heroes side. He is unlocked through either Vanity Chests or Uncharted points.

In addition, a few pre-set Outfits are also available:

A render of Salim for Uncharted 3: Drake's Deception 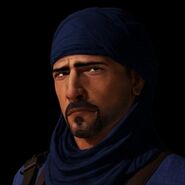 An avatar of Salim for PlayStation Network 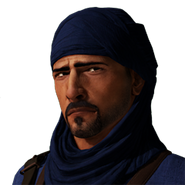 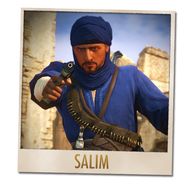 Salim, as he appears in the game's multiplayer mode

Salim in the character selection menu