They were humans that transformed when they ingested the resin/sap of the Tree of Life. They are tasked with stopping anyone who trespasses or comes close to finding the lost city of Shambhala.

Long ago, the Guardians were humans who ate the blue resin produced from the Tree of Life in Shambhala. As a result, they were transformed into aggressive purple-skinned, black-teethed defenders with inhuman strength, resilience, and mobility, as well as a limited healing factor and unnatural lifespan. For generations, these transformed men protected Shambhala from trespassers who sought to use the power of the Cintamani Stone (unbeknownst to them, the Stone was actually accumulated resin from the Tree of Life).

Outside of Shambhala, the Guardians used Yeti-like costumes to protect their identity, frighten trespassers, and to keep them warm in the harsh Himalayan environment. The Guardians were intelligent, having their own form of communication (instilling fear) and constructed weapons, being equipped with lethal crossbows. They were very determined fighters, risking their lives to kill the trespassers.

In Borneo, Marco Polo's crew was swept away by a tsunami, the survivors ate the resin they took from Shambhala in a bid to survive, but the resin transformed them as well, leading to the men killing each other off.

During the World War II era, a Nazi German explorer named Karl Schäfer led an expedition into the ice caves of the Himalayas to look for the Stone. Once he discovered that it would transform those who consume the resin into the Guardians, he killed his own men, preventing the power of the Stone from returning to Germany and altering history.

Events of Uncharted 2: Among Thieves[]

Seventy years later, Schäfer sent Nathan Drake and Tenzin into the Himalayan ice caves to find his expedition. Nate and Tenzin find the dead bodies of Karl's crew lying in different locations of the caves. While Drake and Tenzin scale a rocky wall, a Yeti-like suited Guardian hiding in the shadows behind them watches them and quickly disappears. Later, the explorers are attacked by the yeti-like suited Guardian. They fight it off and learn that bullets do not damage the beast. They continue and find a large underground ice temple and learn that Schäfer shot the men in order to stop them from using the power of the Stone. More suited Guardians attack and the two escape on a lift up to a mountain vista overlooking a monastery. Later, Drake and Elena explore the monastery and catch glimpses of the suited Guardians attacking and being driven off by Zoran Lazarevic's soldiers, trying to prevent the discovery of the entrance to Shambhala under the monastery. The Guardians are seen scaling walls and jumping long distances.

Drake, with the assistance of Harry Flynn, opens the entrance to Shambhala and are attacked by suited Guardians, but Lazarevic and his soldiers arrive, shoot the guardians down with powerful weapons, and reveal the Guardians of Shambhala dressed in costumes to frighten trespassers.

The party enters Shambhala and are attacked by the unsuited Guardians, allowing Nathan, Elena Fisher, and Chloe Frazer to escape the fracas into the city. Drake searches for the Stone and witnesses Lazarevic's soldiers and the Guardians battling throughout the city. Nathan learns that the Cintamani Stone isn't actually a Stone but the hardened resin sap from the Tree of Life. After this, Harry Flynn enters the room with a bullet wound and sits down, but when Elena tries to help him he takes out a grenade and proceeds to blow himself up, injuring Elena. She convinces Nathan he must stop Zoran from drinking the sap in the tree before he turns nearly invincible like the Guardians.

Nathan finds Lazarevic under the Tree of Life, drinking from a large sap pool, becoming nearly invincible as his scars and wounds heal. Drake explodes resin nodules in the tree roots to progressively knock down and injure Lazarevic. The explosions also injure the Tree of Life, causing a long earthquake to start. As the city collapses, Nate leaves Lazarevic to die when the Guardians come in and brutally beat him to death.

As Nate, Chloe and the injured Elena leave Shambhala, the city is seen collapsing and the explosive resin scattered around the city is blown up. The Guardians in the city are most likely dead but some may still be alive, including outside the city.

The Guardians were ancient humans who consumed the blue resin and were transformed into humanoid supernatural creatures with superhuman strength, resilience and a limited healing factor. A single guardian could withstand an entire magazine from a high-powered assault rifle, as well as multiple shots to the head. In addition, they possess superhuman jumping and climbing ability, evidenced by the ease with which they scaled and bounded across rock faces and rooftops. However, they were highly vulnerable to shots from their own crossbows. They may also be impervious to age and illness having survived all these centuries.

The Guardians are either armed with crossbows or blue resin bombs. The crossbow is a lethal silent weapon. A Guardian may drop a crossbow, but you cannot use their bombs.

On Crushing difficulty, a player can be killed with one crossbow volley or one hit from explosive resin. It is best to not confront Guardians head on, stay behind cover to avoid crossbow volleys, and take advantage of powerful weapons (such as the GAU-19).

The most effective weapon to use against the Guardians is their own crossbow, usually killing them with one shot. When facing a group, take one out, pick up the crossbow, and use it against the rest. The crossbow is effective as a stealth weapon against Lazarevic's men, using it on separated guards will make it easier to traverse through guarded areas and avoid firefights.

The second most effective weapon is, oddly, the tranquilizer gun; it is not recommended as you will need to get up close to get a good shot. 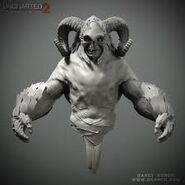 Suited
Characters in Among Thieves
Community content is available under CC-BY-SA unless otherwise noted.
Advertisement