Welcome to the Uncharted Wiki

The Uncharted encyclopedia that anyone can edit!
Warning: this wiki contains unmarked spoilers.
This wiki currently has 800 articles and 2,595 pictures. 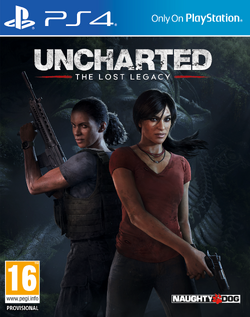 Uncharted: The Lost Legacy is an action-adventure video game developed by Naughty Dog and published by Sony Computer Entertainment. It was released for the PlayStation 4 on August 22, 2017 in North America, and August 23, 2017 in Europe. It is a stand-alone expansion pack to Uncharted 4: A Thief's End, and is the sixth installment within the Uncharted franchise.

Featuring a new single-player campaign, The Lost Legacy is set six-to-twelve months following the conclusion of A Thief's End. The game follows the adventures of Chloe Frazer and Nadine Ross as they scout India to uncover the Tusk of Ganesh.

More about Uncharted: The Lost Legacy
How to help
Not sure where to start?

Have any news? Make a post on our forums!

Discord
Did you know...
Affiliates

The Uncharted Wiki is affiliated with the following wikis:

Want your community included? See how!

Retrieved from "https://uncharted.fandom.com/wiki/Uncharted_Wiki:Main_Page?oldid=110420"
Community content is available under CC-BY-SA unless otherwise noted.