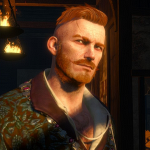 Hello, my name is Raziel.

I am a generally nice and caring person according to some, while others consider me to be somewhat cold and distant. If you ever have a problem or want to talk, I'm always here for you.

Aside from games, I enjoy watching anime and films, reading the Kingkiller books, and writing and drawing. My art can be found here:

You can message me here on my message wall, or you can talk to me via Skype; now, I don't normally give out my Skype, that is by far the easiest way to contact me; if you wish to add me on Skype, ask me to meet you on the Wiki's chat.

Uncharted: Drake's Fortune was the first game I owned on my then-new PS3, and this little game led me to buy its three sequels, as well as Uncharted: The Lost Legacy. I have played Uncharted: Golden Abyss as well, but sadly I do not own the game.

Below you can find my thoughts and short reviews of all six games in the Uncharted series thus far:

I was blown away when I first played Drake's Fortune; it took me a bit while to proceed but I simply fell in love with the game's humor and insane action. It was pretty rough around the edges, and a lot of time action sequences did become fairly tedious, but it was one of the few games at the time that made me feel like an unstoppable action hero.

The story is simple and somewhat cliched, but it's carried away by hero Nathan Drake and a small but memorable cast of characters. I honestly wish they'd given the game's villains more lines and scenes tho; feels a bit like a wasted opportunity.

You know those sequels that make the original game feel like a mere test bed? Uncharted 2 is probably one the biggest examples of it; taking all the best parts in Drake's Fortune while editing a ton of its own, Among Thieves is as close to masterpiece as they get.

Retrieved from "https://uncharted.fandom.com/wiki/User:Raziel_Reaper?oldid=102857"
Community content is available under CC-BY-SA unless otherwise noted.